If you haven’t been subjected to the abomination Microsoft tries to pass off as a content management solution consider yourself lucky. If you have been exposed to this lumbering dinosaur let me offer you my condolences. The truth is a lot of businesses use SharePoint as an easy way for their employees to share information and create their own work websites. I’m sure some people embrace and love SharePoint because they can easily make their own web creations. I would like to smack all of these people. As a web developer, I’ve written this post to express to all the laymen out there the many reasons why SharePoint SUCKS HARD!

SharePoint Should be Hurled into the Sun

I’ve been designing and developing websites for over 16 years now and have run into my fair share of really bad code and crappy content management systems, but SharePoint 2010 takes the cake. This bumbling fossil of what I shudder to call software feels like it was ham-fistedly constructed by a monkey with a closed head injury. For an example SharePoint 2010 makes use of obsolete HTML 4.0 code such as tables, in-line CSS and other long-defunct mark-up.

This is just one of the many reasons why I wish this program could be loaded into a shuttle and shot into the sun. I maintain a SharePoint site at work that makes me cringe just thinking about. For me, the ONLY upside to using this shitty tool is that all of the functions are tied into a massive database at work. That being said read on to see what sends me to Twitter bitching to the masses every time I have to work with this B.S. system.

By the way, I had to create a new category on my site just for this post as it didn’t fit anywhere else. Check out the new category called Bad CMS for future gripes about CMS’s that just well…suck.

Every time I work with #SharePoint It reminds me of how much I hate to work with SharePoint. #shitcode #microsoftsucks #crapcode #hackcode 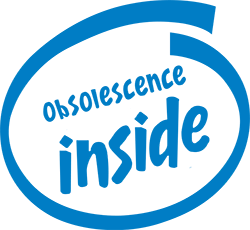 First and foremost SharePoint Sucks because it’s a Microsoft product. What do you expect from a company that uses it’s user community to beta test new Operating Systems? Have you ever noticed how the 1st version of an OS Microsuck releases is far inferior to the system that comes out immediately after? Examples: Windows ME followed by Windows XP, Windows Vista followed by Windows 7 or Windows 8 followed by Windows 10.

I’m getting away from my point. Let me digress.

SharePoint does work with Chrome, but like many Microsoft programs it may force you to use Internet Explorer. Why is this you ask? Well, many Microsoft programs require server side scripts in order to work. If you’re lucky enough that the version of SharePoint your company uses doesn’t crap out on you congratulations. Don’t dare try accessing it with Firefox unless you enjoy staring at a blank screen.

If you’re a developer that’s building a SharePoint site for the first time let me just say I’m truly sorry. It only gets worse from here. You can expect to use out dated, often defunct code to fix/ hack your site to make it display normally. I just had an issue where linked images were displaying a border. The suggested fix/ hack:

BORDER=”0″??? That’s called a fix in SharePoint-land. I call it a massively outdated hack.

Fixes for issues with SharePoint 9 times out of 10 are bad code to cancel out their bad code. Here’s a humdinger of an example I’ve implemented on my own SP abomination. SharePoint automatically adds “Recently Modified” pages to your navigation. Why does it do this? WHO KNOWS?? So this second hack, ahem, the fix is to implement some inline CSS to hide a class created by SP.

You should never use in-line code unless your coding emails. So OK SharePoint let’s use in-line code. It works sometimes, but a lot of times upon saving SP strips out important pieces of your code. It works in front of your eyes until you save it and get the following error. Warning: The HTML source you entered might have been modified.

I’m still working on a hack for this. If anyone knows a way around this please tweet at me.

Once again working with the steaming pile of shit known as SharePoint. I can’t wait until this fucking program dies. #FUCKSHAREPOINT

SharePoint Is not Inherent at All

Where to edit content is not at all inherent. If you walk away from SharePoint for any period of time and have to come back to work on will have to Google where things are saved. What do you need to do to upload images? Where are they stored? Where do I edit the menu?

You know you’ve got a real shit program when the people using it don’t even like it. Check out this article here about how most SharePoint users hate SharePoint.

It’s not mobile friendly, it’s ugly out of the box, it’s easy to break and…

I could easily go on and on and on, but I think I’ve outlined the major reasons why not to use SharePoint above. 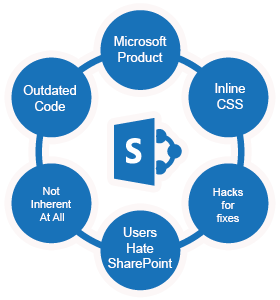 Don’t get me wrong I understand why people want to use SharePoint. It’s easy for non-coders to use to create sites. It is a good place to share/ save inner office documents. It’s calendar system is easy to populate. Yadda yadda yadda.

Speaking from a developers stand point it’s entirely outdated crap code. It’s a nightmare to work with. I would never put it on a resume that I’ve used/ coded a SharePoint for so many reasons. I would never want anyone to see what I had created in SharePoint. I wouldn’t want to perpetuate the use of this software. It would not at all be an arrow in my coding quiver, but most of all I wouldn’t ever want to give the impression that I would like to work with this abomination in the future. 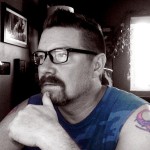 Goodbye Internet Explorer You Will Not Be Missed

Internet Explorer and Why You Should Stop Using it Today